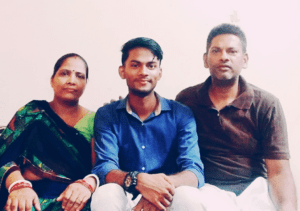 Vikram was born as a second child to a family of seven. Around the time of his birth his parents moved from the countryside to Delhi in pursuit of a better life. But with no education Vikram’s father had to toil away in his small clothes dying business. Growing up in Delhi, Vikram saw the opportunities of life but had no idea how to take advantage of these. He dreamed of becoming a pharmacist – but no one in Vikram’s family had ever attended any higher education. Neither his parents nor Vikram had any idea where to start or who to turn to for help.

In addition, as the second oldest Vikram wanted to support his parents as soon as possible. The only option he saw was to leave school early and  start working.

Although Vikram initially felt good about supporting his parents it slowly dawned on him that as an unskilled labourer he would never manage to support his parents in a meaningful way. In addition, he realised that without an adequate qualification, his dream of becoming a pharmacist moved further and further away.

Vikram’s parents supported him with everything they had but their poor education meant that they simply lacked the knowledge about further educational opportunities and the importance of English. Luckily, they remembered that Vakrim once visited a FEA branch for a day in Grade 8. They thought that Vikram might get the right kind of support to get him out of the low paying work trap. Upon their recommendation, Vikram applied and got accepted into an English class at FEA.

Once enrolled for the year long training, Vikram showed his grit by focusing on tough new words and mastering their pronunciation. A facilitator, Neena, noted his dedication and commitment. She took a liking to Vikram and went beyond the curriculum by also mentoring him. Neena would listen to his dreams, give him information, and hold him accountable as he was developing a plan to attend pharmacist training.

For a year, Vikram juggled his low paying job with the requirements of daily attending the Freedom Employability Academy. He would get up before dawn, work long hours, and then attend classes after sunset. At the same time, he developed a plan to become a pharmacist. For a year he worked day and night, energised by the vision of getting into a pharmacist training program and he had the encouragement and support of his mentor.

Towards the end of the FEA year, his English had improved considerably, and he finally applied for a certificate course in Pharmacy – in English! No one in his family had ever applied for a higher education, let alone doing the training in English!

While in the pharmacist training program, Vikram again followed Neena’s advice, worked his network, and found a friend who helped him to get an interview with Apollo Hospital. He impressed his interviewers with his excellent grip on the English language – particularly the difficult medicine names and their ingredients. Vikram was accepted and has been working at their pharmacy for over a year now. Finally, Vikram is in a position to support his parents and the whole family in a meaningful way.

FEA helped a school drop-out move himself out of poverty by learning English and developing an action plan to further his education. The efforts of his facilitator, combined with his own dedication, gave Vikram the confidence and conversational skills that he now uses on a daily basis. His passion for long, tough words continues while he sets himself a new goal of opening his own pharmacy one day.