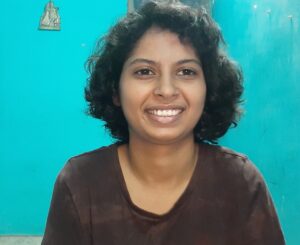 Born and raised in Shahdara, Delhi, Shweta Shukla, FEA ’15, is a budding entrepreneur. But she is an aberration, not the norm — the “ideal girl” of her society looks very different, and Shweta is quietly aware of how she bucks the trend.

A sprawling, concrete jungle in north-east Delhi, Shahdara is home to migrants, old and new, who come to Delhi in search of better opportunities from villages all over India, but usually Haryana and Uttar Pradesh. This Delhi is far from the majestic monuments and verdant spaces of the capital: this is the Delhi of long power cuts in sultry summers, insufficient sanitation, and seemingly feudal norms about who can do what. Being a teacher is one of the few professions deemed appropriate for a woman, if at all, and that too with appropriate safeguards: even teachers in Shahdara wear their veils as soon as they leave their schools. The pay for full-time work can be as low as $20/month.

Shweta was a sharp student and went to one of the better public schools in Shahdara for girls, Pratibha Rajkiya Vidyalaya. Growing up with her younger brother, she was raised “like a boy,” she says. But she was shy and had few friends at school. She knew no English and could barely talk with strangers. And her parents were on the verge of a divorce.

Shweta does not like to lose. As a young high school student, she knew she needed a hand up in life, and that the opportunities available to her would change radically with fluent English and public-facing skills. She enrolled in an FEA branch near her home, and participated in FEA’s free, yearlong program, passing all of the levels of instructions. Countless sessions of Jeopardy, group discussions, fun class competitions and mock-interviews went by. Shweta’s competitive spirits ensured that she had soon become comfortable with English and acquired valuable personal skills such as public speaking, team management and an unassuming but solid confidence.

In 2018, Shweta’s parents separated, just as she finished high school. She had never imagined that things would reach such a point. Shweta found herself responsible for providing for not just herself but also her mother, a homemaker, and her younger brother, still in school. This was also, technically, the time for college, even though Shweta knew by then that academics could not be her calling — she had too much on her shoulders for that to be her goal.

Remarkably for a young girl from Shahdara without even a college degree, Shweta got a well-paying job in Customer Service and Sales at sprint.com, a Multi-National Company (MNC) in Noida. “I cracked all of my interviews,” she says. Attending college classes by day and working by night, Shweta was now paying their rent and making ambitious, entrepreneurial plans for the future. “I knew I had the capability to support myself and my mother,’ she asserts. Every night, she would ride the long distance between Shahdara and Noida on her Vespa, working hard and overtime. She makes no bones about a simple fact: without FEA, it would have been inconceivable for her to get such a job and become financially self-reliant.

One could be forgiven for imagining that Shweta might have wanted to stick to this arrangement. Shweta had moved her mother and brother from Shahdara to Noida with herself, the salary more than covered their needs and Shweta loved her workplace and her colleagues. But this was not the end goal. “I could not settle for this. I had to do something of my own,” she says.

With her savings from all the overtime work she had been doing and investments and support from friends, Shweta left her job this March and started work on two related start-ups: one in the gifting e-commerce space and another in the ethnic wear space. She is now in the process of listing all of her products and developing the two websites. She also rents a private office space of her own in Noida. The COVID-19 pandemic and the consequent economic downturn have done nothing to down her spirits or her plans— except for a consignment from China that she is no longer importing. Fear of failure does not bother Shweta. “If this does not work out, I have so many other business ideas.” The optimism is infectious.

Shweta will graduate from college this year, whenever her college’s administration is able to conduct final exams. Shweta asks a simple question in parting: “You tell me, why would anyone give such a job and pay so much to an eighteen-year old girl from Shahdara?” It has been 5 years since Shweta graduated from her FEA program but she is still in touch with her FEA friends — her friends from FEA, not her school, happened to become friends for life.