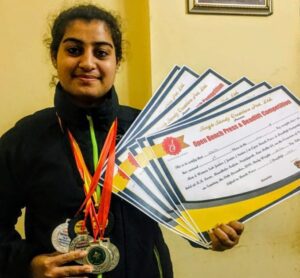 Struggle breeds strength, and Shovita has learned this thanks to FEA. She was born as a third child to a conservative family with two older brothers. As it is still very common in India, her parents expected her to get married early and follow a “traditional family life.” This idea always unsettled Shovita though she was not really aware of this feeling. She just felt trapped not knowing another way in life.

Shovita didn’t want to disappoint her parents expectations, so she did her best to be an obedient daughter while hiding her true passion: she was a fitness fan. In her dreams Shovita would go to the studio every day but in reality she barely dared to go there at all. Occasionally, she would secretly slip into a nearby gym to exercise with what little she could afford to pay. This went on for years, leaving Shovita more and more unhappy.

One day, Shovita noticed a noisy bunch of young adults and teenagers, many of them girls, who would gather on the street in front of a big building. She was curious but did not dare to find out what was going on.

When she finally did muster enough courage, Shovita learned from one of the girls that this was the training center of the Freedom Employability Academy. The confidence of the female students made her feel so free. This liberating experience encouranged her join FEA a couple of weeks later.

As the weeks and months of the one year training went on, Shovita was mentored by Poonam Sharma, a self-confident, female

instructor at FEA. Just by seeing Poonam’s self-confidence as a woman, Shovita gained more and more self-confidence herself. Thanks  to the public speaking exercises at FEA, Shovita began to articulate her needs more clearly. She began to stand up for what she was interested in.

It was around that time that Shovita met a trainer at the gym on one of the rare occasions that she sneaked into the gym. He encouraged her to train even more frequently because he saw her potential to compete and win tournaments. But this kind of training would have required great sums of money that Shovita didn’t have.

With her freshly developed self-confidence Shovita decided to speak to her trainer about the lack of funds. Surprisingly, he agreed to waive the fee for her training and together, they honed Shovita’s raw passion and strength. Shovita went on to win over 40 medals in less than 6 months! She even won twice at the state level competitions. Shovita’s next goal is to attempt the nationals.

Shovita’s support from her teacher and the inspiration from her mentor, Poonam Sharma, as well as her new friends at FEA gave her the confidence and energy to follow her dreams.

FEA helped Shovita unlock an opportunity that due to the lack of money would have never been realised. Shovita followed her dreams and finally even found the time to give back and become a facilitator with FEA whilst still nurturing her career as a professional lifter. More power to her!