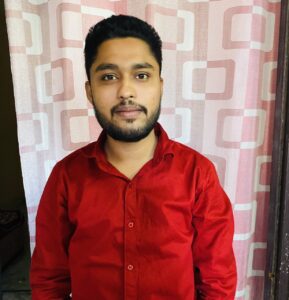 The son of a hard-working tailor in Laxmi Nagar, Delhi, Arbaz Khan, FEA ’17, had just graduated from high school in 2014. There were no plans for college: Arbaz could hardly imagine life beyond the local pharmacy, where he had worked part-time for years already. His parents did not have any particular expectations from him — his sister was the one who would come first in school. The family had enough to eat and live by but that was it.

“I had a fixed mindset,” he recollects, using terms that he came to understand and appreciate at FEA. “I had no real goals in life beyond making a basic living.” Soon, he realized that even working full-time at the pharmacy was going to be barely enough to make a living on. Though it initially seemed just okay, Arbaz earned about $4/day there (~Rs. 8500/month), less than the minimum daily wage in Delhi at that time.

One day, a friend asked — why don’t you do some course? Something that might give you a leg up in life? Someone suggested travel management — those were the years in which the travel business had begun to boom in India. After a year of working full-time as a pharmacist’s assistant and seeing the complete absence of growth therein, Arbaz enrolled in three different programs at about the same time: a distance learning undergraduate degree, a six-month travel management course, and finally, FEA.

Arbaz was casual about FEA at first — once again unlike his sister, who took to FEA like fish to water. The first few FEA sessions tend to involve games and other ice-breakers to get students comfortable with expressing themselves in front of each other. Arbaz assumed that the entire program would be all fun and no work. In a few weeks, Arbaz had dropped out of his FEA class and gone back to the pharmacy.

Assuming that the travel management course would be enough to land a beginner’s position in the field, Arbaz applied widely the following year. Despite getting 20 interviews, the couple of jobs he landed actually paid less than the pharmacy. The rejections stung. He had no intentions of becoming cheap labor again.“I am nothing without English,” Arbaz remembers feeling.

After feeling himself crumble when expected to speak in English and seeing his sister become a confident and articulate FEA Facilitator, Arbaz realized that the solution had been staring at him all along. For nine months in 2016, Arbaz worked incredibly hard at FEA. He attended multiple FEA sessions a day, instead of one. He followed almost religiously the entire FEA curriculum, designed by researchers at Stanford and MIT to enable Indian youth to become employable and self-reliant. Arbaz focused on acquiring English proficiency but also the personal skill training embedded in the curriculum. Something had clicked within him — “my mind changed due to FEA,” Arbaz says.

After graduating from FEA, Arbaz immediately got an offer as a Customer Sales Representative at GoIbibo. They paid him a normal beginner’s salary in India at the time but Arbaz was not satisfied — he wanted to work in an international travel firm. Arbaz now works at Crystal Travel, a UK-based firm, at their Gurgaon office. He has been promoted already and gets performance-based incentives that amount to around Rs. 50,000 or $650/month — almost a six-fold increase over his pre-FEA salary.

Arbaz’s hours are late given the time difference with the UK, and he gets two days of leave every week. Instead of just resting and spending time with his family, Arbaz goes back to his FEA branch every week and spends his weekly holiday talking to the students there. “I am a live example of what FEA can do — I want to motivate them by making them see what FEA can do to you,” he insists. “I especially enjoy talking to new batches of students.” With Arbaz and his sister, Gazala Khan, FEA has transformed the entire family. Arbaz’s parents are proud of their children.

But Arbaz has even more plans for giving back. He lives near a big public hospital and sees the families of out-station patients lined up near the subways. “Every year, so many patients come to Delhi in search of better treatment. You can find them sleeping near the subway without food or warm clothes in the winter.” Arbaz wants to help them and is planning to start a non-profit for them. He is in the process of identifying how exactly he should target his support and raise more funds.                    The only one Arbaz has shared this idea with is his old FEA facilitator, Irfan Sir — a trusted confidante.  Arbaz is humble about his journey so far and yet optimistic about the return-on-investment: “I was satisfied when we had much less. Now that God has given us more, I know that giving back will mean that we’ll eventually get much more in return.”

His parents only wanted to ensure that he did not go astray. Arbaz himself was not trying for much else. His education thus far had given him little appreciation for different career possibilities or the ability to express himself.

— he assumed that focussing on the six-month travel management course would be enough to land him a decent job.