And the first prize goes to….

“Perfect happiness is a beautiful sunset, the giggle of a grandchild, the first snowfall. It’s the little things that make happy moments, not the grand events. Joy comes in sips, not gulps.” (Sharon Draper)

One such perfectly happy moment was when it was announced ‘…And the first prize goes to…. Ankit Nagar’ during the prize distribution of the FEA Facilitators Quiz Contest. This was my unforgettable moment.

Rewind to December 2016, I read the mail about “FEA QUIZ CONTEST” and I could hear myself say, “I can win this!!” Being an engineer by training, I was confident of sailing through in logical and reasoning categories with ease. I was buzzing with excitement.

The quiz stretched over 3-4 months with one round completed every month. The very first round had all 300+ facilitators of FEA participate and with each  round, some of them were eliminated from the quiz. The first round was to include reasoning, general knowledge, literature and current affairs. While preparing for this round, I managed to read recommended library books. In that round, as in all others, facilitators from all across Delhi and UP participated and I bagged the second position, feeling fortunate and blessed. The appreciation and honor I received was more precious than any material gift. With every round my self-esteem and the confidence grew. And I continued to win all the rounds. Victory in these rounds also brought popularity and I  made many friends in each of these rounds.

All of us started eagerly to look forward to the Reconnects when these rounds were held.

For the Finale on  27th April, 2017, 31 finalists from all over Delhi and UP were called to the Head Office. It was heartening to see other finalists their supporters, along with some FEA graduates. Each one of us felt like a winner. 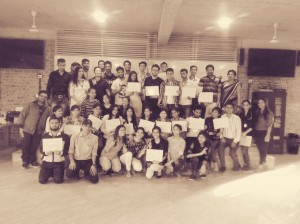 This was more diverse and exciting contest than the previous rounds. It was well prepared and planned. There were 6 different categories and each one of them was tougher than other. I decided not be nervous but to enjoy every bit of it as it was designed to be enjoyed. I attempted every round with enthusiasm.

During this journey of participation, I learned that winning is not everything. The joyful experience that we savored over these few months and the memories which I carry from all these rounds will be cherished throughout my life.

And the moment when my name was announced as the winner of FEA QUIZ CONTEST-2017 was splendid one. It has motivated me to work harder as an individual and as a facilitator.

Hoping, for more such contests in the near future.

What’s a miracle? Seeing a child who was quiet and shy,...

The days were turning mundane and I was definitely itching...

Freedom Employability Academy is a project of AAM Foundation

Freedom Employability Academy (FEA) admits students of any race, color, national, and ethnic origin to all the rights, privileges, programs, and activities generally accorded or made available to students at FEA. It does not discriminate on the basis of race, color, national and ethnic origin in administration of its educational policies, admissions policies, scholarship, and athletic and any other FEA administered programs.